The wonders of our territory - MadrePerla Resort

The wonders of our territory

The town of Torre di Ruggiero belongs to the province of Catanzaro and is 62 km away from it, the capital of Calabria. Torre di Ruggiero’s population is 1054 (Torresi) and has a surface of 24,8 square km and has a population density of 54,27 per kilometre. It rises 566 metres above sea level.

The characteristic village of Torre di Ruggiero is surrounded by dense woods with numerous trails. These, invite excursions that restore the close bond between man and uncontaminated nature. Closer to the historical centre, pleasant areas host the shrine dedicated to the Madonna delle Grazie. The ample amphitheatre opens up in front of the shrine. Having reached the heart of the residential area, you are encountered by an atmosphere that takes you back to remote times.

All of Calabria, offers considerable points of interest tied to history, but above all, to traditions.
Madreperla is set in one of the territories in the province of Catanzaro, which is Torre di Ruggiero, one of the most interesting especially due to the majestic artistic patrimony. Borgo Normanno, Torre di Ruggiero is known as a spiritual hamlet due to its’ Shrine dedicated to the “Madonna delle Grazie” which is also the destination of thousands of visitors. 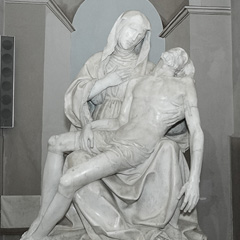 With “La Pietà”, a sculpture by Antonello Gagini dated to 1521, is safeguarded in the main church of Maria Santissima Addolorata.  It is an example of Renaissance art,  a sculpture in white marble with the Virgin Mary that holds Christ in her lap after having been brought down from the cross. 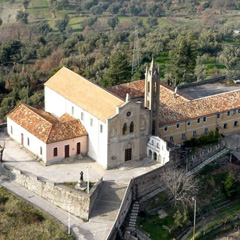 With its Capuchin monk convent which dates back to 1576.  Inside, one can still today glimpse the cloister with a big well to gather up rainwater that the monks used for various uses.  Then, the small church with its’ decorations was commissioned to the painter Nik Spatari. 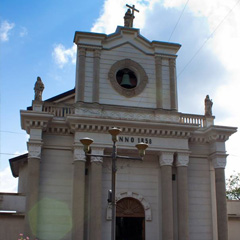 The Shrine of the Madonna delle Grazie pulls its origins to the time of iconoclasm, when the Basilian monks, escaping from the East, founded in this place, a Basilian Dacia.  In the centuries, the devotion towards the Mother of God, has always been dear.  On April 17th, 1677, two girls of the town, Isabella Cristello and Antonia De Luca, had gone to the Shrine to pray. Here, while they were collecting their thoughts, Isabella was cured of her illness of which she had long suffered.  The two girls, witnessed the celestial vision of the Virgin that asked them a place of worship, dedicated to Her, for people near and far and whom could call “the small Lourdes”. 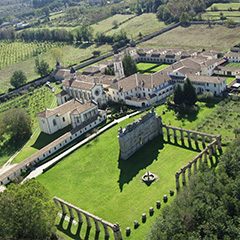 and the Certosa, dated to 1091,  the hermitage of Santa Maria di Turri or the Forest.  Not different than that of Grenoble, the cells of the hermit fathers – huts made of wood and mud, rural and primitive, but solid enough to resist the weight of snow.  They were distributed around the monastic church:  a  small building made of stonework.  The church was solemnly consacrated on August 15th 1094 in the presence of Ruggero I of Calabria and Sicily.  The Certosa remains the beating heart of spirituality of  Calabrian forests.